How do you cope with the power going out?

While rearing two young boys with life-threatening allergies, the smallest things can become big problems. Let’s take losing power due to a summer thunderstorm for example.

Here’s a quick story about my oldest son (let’s call him Buddy) and how our DIY home battery backup system kept him safe. He’s two-years-old, super smart, and full of life. As alluded to earlier, he suffers from life-threatening food allergies. In addition to that, he breaks out in hives that spiral out of control quickly if he gets overheated.

Oddly enough, the hives show their ugly heads most often during Buddy’s energy extremes (running and sleeping). While not life-threatening in and of themselves, the hives can be quite an ordeal.

A few weeks ago we had a good ol’ East Texas summer thunderstorm roll in. If you’re like me, there’s not much better than sleeping during one of these gully washers. Just after putting the boys to bed, the lights began to flicker and moments later the house was dark.

After reaching into my pocket to illuminate the room with my iPhone LED, we gathered up some flashlights and called in the outage to the utility company. To our disappointment, they informed us we would be out of power until the next morning.

The AC had only been off 30 minutes or so, but when my wife (Jenn) went back to check on the boys, Buddy was already itching. We knew we were in for an eventful night.

Thankfully, I had listened to the interview with Steven Harris on The Survival Podcast that covered building your home & mobile battery bank about two years ago. This interview (part 2) along with part 1 of the series are among my favorite TSP episodes. I highly recommend them to anyone looking to build a DIY home battery backup system.

After listening to this interview, I started saving for a home battery bank. I purchased an Optima battery from a guy on Craigslist that ended up being old and crappy despite what he said when I purchased it. Luckily, I was able to get my money out of it and learned a valuable lesson.

I saved for a bit longer and put together a relatively inexpensive DIY home battery backup system. 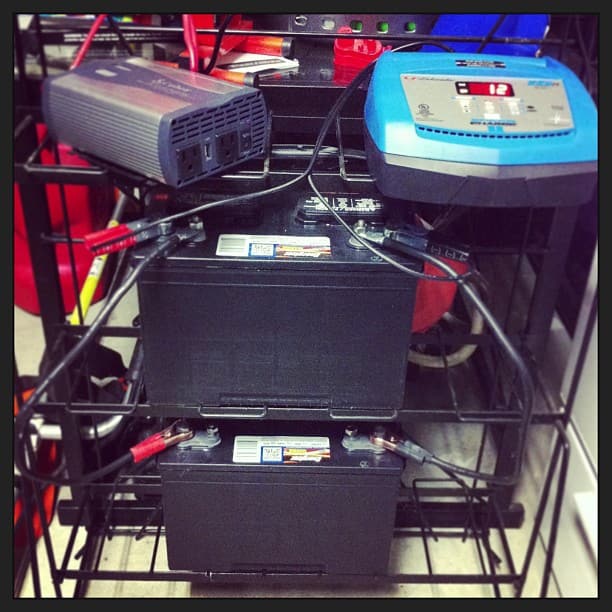 Back to the story

I clamped my Cobra 800 Watt Power Inverter onto one of the batteries and plugged two fans into it. With a fan blowing directly on Buddy his skin remained cool to the touch all night long. As a parent, there’s no feeling in the world like knowing your children are taken care of.

Tip for cooling from a DIY home battery backup: Cool the person, not the room!

My wife, who didn’t fully understand why we needed the batteries two years ago. After this event, she asked me about getting more to extend the power capacity of our DIY home battery backup. How cool is that guys!

This simple DIY home battery backup setup costs around $300 total and that’s not the kind of cash I have laying around. Having said that, being able to keep my boys cool and our cell phones charged is worth every penny of it.

I would encourage you to build a simple battery bank for emergencies. If you’re the kind of person who needs to see how it’s done than I would highly recommend purchasing Steven Harris’s video series on building a home battery backup system.

He offers a complete step by step video on how to make your own emergency home battery backup system. It can be as small as one marine battery or it can be a whole bank of batteries. He shows you everything you would ever need to know. 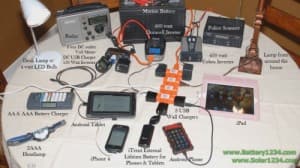 This DIY Video is incredibly detailed. No matter what your DIY skill level is you can watch these videos and then make your own DIY home battery backup system.

If this isn’t the right time for you to build a battery bank, I encourage you to at least get the Cobra 800 Watt Power Inverter. You can clamp this onto your car battery and run fans like I did or even power your refrigerator if need be. Just be sure to run your car while you have large items running on it.

If you have a battery bank I want to hear about it. Let me know in the comments section below.

4 thoughts on “Why I Built a DIY Home Battery Backup”